Worldwide Cost of Living in 2020

Problem Solving Mehak Sarwar Management Coach IFPMC-LONDON   Problem-solving is a soft skill. This means that it is a skill one learns by themselves rather than something one learns...
Read more
Share
Facebook
Twitter
Pinterest
WhatsApp

The findings of the latest Worldwide Cost of Living survey

A report by The Economist Intelligence Unit

As with last year’s Worldwide Cost of Living Survey, and for only the second time in the survey’s history, three cities share the top spot as the world’s most expensive to live in. Like last year, Hong Kong and Singapore continue to occupy two of those places. However, this year also marks change, with a Japanese city, Osaka, climbing three places to join Hong Kong and Singapore at the top of The Economist Intelligence Unit’s rankings. Osaka replaces Paris, which drops down to 5th place, equal with another European city, Switzerland’s Zurich.
Elsewhere, as with Osaka, a strengthening of the yen led Japan’s capital, Tokyo, to rise from 13th to joint 8th. Higher prices in two US cities, New York (ranked 4th) and Los Angeles (8th), were influenced by a combination of strong local currency and firm domestic demand, which drove up prices for clothing and domestic help. Tel Aviv (Israel), the only Middle Eastern city in the top ten, rises from 10th to 7th, with transport costs such as the price of owning a car also continuing to rise.
In previous years, eurozone cities have typically moved up and down the index in tandem, and often in contrast to non-euro area European cities. However, this time there is a much clearer trend across all European cities. Modest domestic demand and weak global energy prices have kept inflationary pressures subdued across Europe in the past year. Of the 37 European cities surveyed, the index scores in all but four—Moscow, St Petersburg, Kiev and Istanbul—have fallen, with 31 experiencing a fall in overall rank. In addition to Paris and Zurich becoming comparatively less expensive, Geneva, another Swiss city and long-standing member of the top ten, falls from 5th to 10th, while Denmark’s Copenhagen (the joint 7th most expensive city in the previous year’s report) drops out of the top ten altogether.
In contrast to the slide in the rankings by European cities, higher living costs associated with the strength of the US dollar have produced another stark trend in this years’ report, with 15 of the 16 US cities rising in the rankings. Indeed, many of the movements in this year’s index was driven by currency shifts. The South Korean capital, Seoul, drops out of the top ten on the back of currency depreciation, while some of the biggest ranking falls outside of the top ten, such as Reykjavik (Iceland; from 15th in 2018 to 29th in 2019), Casablanca (Morocco; from 92nd to 106th) and Lusaka (Zambia; from 114th to 127th), also came as a result of local-currency depreciation.
At the lower end of the rankings, high inflation partly as a result of depreciations and devaluations of local currencies in previous years conversely led to some biggest rises in prices. Venezuela’s capital, Caracas, saw its cost of living rise by 140% in 2019, while the cost of living in both the Iranian capital, Tehran, and Turkey’s Istanbul rose by more than 13%, owing to currency-driven inflation.
Taking an average of the indices for all cities surveyed, and using New York as the base city, the cost of living has fallen by around 4% on average across the 133 cities surveyed. This mainly reflects the impact on global currencies of easing monetary policy, uncertainty around the US-China trade war (which has put pressure on some emerging-market currencies) and the strength of the US economy.

US and European cities head in opposite directions
Unlike in the previous year, the Federal Reserve (the US central bank) loosened monetary policy in 2019, enacting three rate cuts. However, the US dollar appreciated against most other currencies as a result of the strength of the US economy and relative weakness elsewhere, particularly in Europe, where growth slowed in the eurozone and interest rates returned to negative territory. This combination drove a stark trend, with all but one of the 16 US cities climbing in the rankings. The highest climbers are Boston (rising from 51st to 33rd), where fast-paced population growth continues to push up demand; Atlanta (76th to 63rd), where a strong jobs market and rising house prices are having a similar effect; and San Francisco (25th to 15th), where a high concentration of wealthy individuals means that prices continue to rise quickly for more luxurious goods and services in categories such as personal care, clothing and domestic help (for which it is the most expensive city in the world). Meanwhile, New York (4th) and Los Angeles (8th) both moved further into the top ten. As with previous years, the broad trend shows that US cities continue to prove particularly expensive for domestic help and utilities, with seven cities in the top ten for the former category, and six in the top ten for the latter. The rise in cost of living in Asian cities has been a feature of many of our reports over the past ten years, a trend continued in 2019 as three Asian cities (Singapore, Hong Kong and Osaka) share top spot for the first time. Key Asian business centres continue to be the most expensive places for grocery shopping. However, the survey results for 2019 highlight that, on average, the fastest overall risers in recent years have been North American cities. In contrast, the euro weakened against the dollar in 2019, owing partly to sluggish growth in the eurozone as external headwinds such as the US-China trade war negatively impacted export-led economies such as Germany. As such, all eurozone countries recorded lower index scores and rankings in 2019. However, this pattern extended beyond the euro area, with the cost of living in most other European cities also falling relative to New York. This is a trend that follows on from similar falls in European cities’ rankings in 2018 and over the past ten years. With Copenhagen dropping to 11th (Denmark pegs its currency, the krone, to the euro), only three European cities remain in the top ten, compared with seven cities ten years ago. That said, European cities continue to dominate the top spots in individual category costs for personal care, household goods and recreation, reflecting high wages and household spending.

Currency shifts drive the biggest movers
There was not the same volatility in emerging-market currencies in 2019 as seen the previous year, partly because looser US monetary policy eased investor fears. Yet, the relative appreciation of the US dollar, combined with slow growth elsewhere and specific domestic policies, continues to play a major part in driving the biggest movements of cities across the index. Istanbul, the sharpest climber in the rankings, was deeply affected in 2018 by a currency crisis, leading to a 48-place fall last year as the Turkish lira lost considerable value. Although the lira remains weak, it has strengthened in comparison with its nadir in the third quarter of 2018. This, combined with double-digit inflation, led to a 24-place rise in our rankings, to 96th. Ukraine’s capital, Kiev, rises by 22 places in the overall rankings, to 86th, partly owing to the country’s record grain harvest in 2019, which boosted export earnings, leading to a strengthening of the Ukrainian hryvnya against the US dollar. In addition, prices in Kiev are being boosted by rising demand following a string of increases to the minimum wage in recent years and stronger real wage growth more generally—albeit from a very low base. The Russian capital, Moscow, also climbs up the rankings, from 102nd to 86th, partly as a result of the Russian government’s decision to increase value-added tax (VAT) from 18% to 20%, pushing up consumer prices. Contrasting downward movements in the rankings were also heavily influenced by local currency weakness. Geographically, many of the biggest fallers in the rankings are European cities, including the Bulgarian capital, Sofia (90th to 106th), Reykjavik (15th to 29th), Rome and Dusseldorf (both fall from joint 32nd to joint 43rd). This was largely a result of the euro and currencies pegged to it, such as the Bulgarian lev, losing ground to the dollar in 2019. In similar fashion, Iceland’s currency, the krona, has continued to depreciate on average since the 2018 Worldwide Cost of Living Survey, with investor
sentiment damaged by the collapse of the domestic airline industry—albeit Reykjavik remains among the top ten most expensive cities worldwide for alcoholic beverages and recreational activities. Beyond Europe, Lusaka, the Zambian capital, posts one of the biggest falls in the rankings (from 114th to 127th), as a tumbling currency, caused by investors fleeing the country over fears of a sovereign default, has driven down the cost of living, more than outweighing a drought-related rise in inflation. 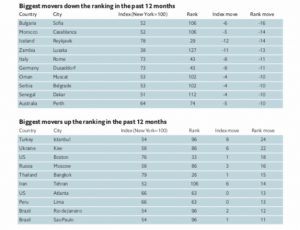 Limited change but clear trends at the bottom of the rankings
The cheapest cities in the world have seen only limited change in the rankings, but they do also demonstrate two key trends. First, South Asian cities still make up the largest geographical grouping in the bottom ten places, with Pakistan’s Karachi (joint 129th) and three Indian cities, Chennai (126th), Bangalore (125th) and New Delhi (joint 122nd), all ranked among the cheapest. Despite rapid population growth and fast-growing economies in the region, South Asia remains structurally cheap as a result of low wages and high levels of income inequality, which limit household spending, as well as strong retail competition, suppressing potential price rises. Nevertheless, this year continues the gradual rise up the rankings of the cheapest Indian cities. Five years ago, South Asian cities made up four of the five cheapest cities in our index, whereas Karachi is now the only such city, with Bangalore climbing out of that bracket this year.
The second (related) trend is the increasing prevalence among the lowest-ranked cities of major domestic political and economic instability. Caracas, which moves up from 133rd to 128th, has the highest rise in its index score of any of the cities in the survey, as years of disastrous policy-making, economic sanctions and recent political unrest have led to soaring inflation following the devaluation of the currency.
Similarly, the Syrian capital, Damascus, which has experienced soaring inflation and goods shortages in recent years owing to the ongoing civil war, returns to the bottom of the index (replacing Caracas) owing to renewed pressure on the local currency. Elsewhere, Uzbekistan’s Tashkent moved down one place, to 132nd, owing to the continuing impact of a 2017 currency devaluation, while Argentina’s capital, Buenos Aires (from 125th to 29th), also became less expensive as a result of a contracting economy and the consequent hit to demand. The broader trends of rising political instability and ongoing currency risks observed by The Economist Intelligence Unit are likely to continue to play an increasingly important role at the bottom of the index in 2020, over and above traditional structural factors such as those seen in South Asia.

The global oil disaster.. A comprehensive analysis of the oil price crisis and its consequences on Iraq

Foreign investment in Iraq between obstacles and solutions