Evaluating the adequacy of the international reserves in the Iraqi economy

Evaluating the adequacy of the international reserves in the Iraqi economy

With the increasing attention to financial crises (domestic and international) and their negative effects on most macroeconomic variables, many world economies, especially developing ones, have worked to maintain an adequate volume of international reserves in anticipation of emergency and unforeseen circumstances in order to achieve and set goals that are consistent with the requirements of economic stability, and maintaining an adequate volume of these reserves as a safety factor to face economic shocks (internal and external), as well as to utilize its effects on the stability of the exchange rate and thus on the general level of prices, so that the final result is reflected in economic stability.

As far as the Iraqi economy is concerned, the developments witnessed after 2003, namely, the openness of the economy with subsequent increases in oil prices in some years in the following decade, led to the increase in international reserves (IR).

Nevertheless, the necessity of observing developments in the volume of reserves according to the indicators of assessing the adequacy of international reserves remain crucial to a mono sided economy like Iraq’s, so the Central Bank of Iraq should maintain a volume of reserves in accordance with the optimal size , otherwise it may miss the opportunity to invest these reserves in time of surpluses, and for the worse it may expose them to drainage in times of shortages.

Despite all the challenges surrounding the economic, financial and monetary reality in Iraq, still there are indicators showing that the economy still maintains satisfying levels of reserves in accordance with international standards till 2016.

In 2001 the International Monetary Fund issued guidelines for managing international reserves and identified a set of general economic indicators that can be used as estimators to indicate the adequacy or optimization of the size of the reserves held by the state, these are: –

This research concluded that relevant variables during the period 2003-2016, does show a level of international reserves that exceeds its optimum size in as much as the following indicators are concerned : 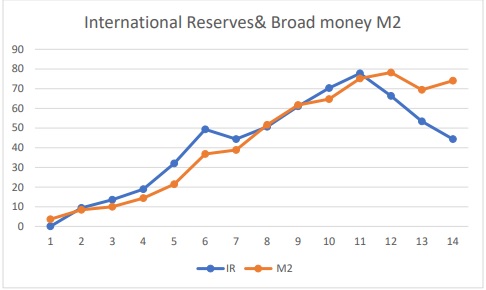 The last indicator showed that IR do not cover foreign debt obligations for a year – a criteria adopted by the IMF to indicate credit worthiness of the economy.

In conclusion, we may state the following:-

Stemming from the fact that international reserves represent one of the arms of the Central Bank Independence stipulated by law, monitoring the size of reserves attributable to the relevant indicators remain crucial in maximizing the accumulation of economic wealth.

Furthermore, the surplus of IR should be used as a core for establishing a (Sovereign Fund) in order to maximize the return and achieve the necessary liquidity to face internal and external shocks.

The central bank is authorized and obliged by law to investment IR, in order to maintain consistent monetary and fiscal policies, and built a buffer to absorb external shocks, caused by external factors among which is the fluctuating of oil prices. The role of the Central Bank should not be confined to supplying the imports of the government and the private sector or confined to preserve stability in exchange rates. Long term economic development considerations should be kept as a sustainable necessity for the benefit of future generations, foremost of which is the accumulation of wealth and pursuing feasible economic development in the sectors of the economy.

Al-Kadhimi government Hisham Al-Hashimi historian and researcher in security and strategic affairs Efforts to mobilize supporting the government of Adnan Al-Zurfi were in despair after the Sunni...
Read more
Load more